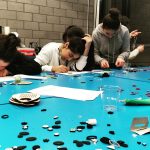 ‘Making Things!’ (LUCA School of Arts / OPAK) is a Participatory Design trajectory in which a collaboration with local youth work organisation ‘Gigos vzw’ is set up to design workshops together with local children and youngsters of 6 – 16 years old and youth workers, within the context of FabLab Genk. Rather than defining the variables of the workshop beforehand, the designers, researchers and youth workers involved are looking for ways to ‘design’ the workshops in a participatory manner. This means that, via e.g. co-design, the children are asked to design the workshops themselves before effectively participating in them. In doing so, ‘Making Things!’ is part of a strategy to actively involve others (besides students and traditional makers) – and more specifically those from the surrounding neighbourhoods in Genk – in FabLab Genk striving for long-term participation. To give form to this trajectory, an iterative methodological process of three cycles will be carried out. 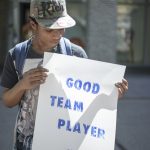 ‘De Andere Markt’ (The Other Market) (2015 -…) is a Living Lab in the neighbourhood of Winterslag (Genk, Belgium). ‘De Andere Market’  is an open design lab wherein designers, researchers, citizens, creative professionals, policy makers, etc. think about the future of work in Genk. The lab explicitly starts from the existing capabilities of Genk’s citizens and tries to further develop these capabilities by co-designing their imagined future workspaces (which we call workstations) with experts in design research, public and private/business bodies. De Andere Markt is a space where new issues and designs around ‘the future of work’ evolve from bottom-up, long-term participation between diverse people and communities.  This Lab is a collaboration between research groups in Design (Social Spaces -LUCA School of Arts) and Architecture (ArcK – UHasselt) and shelters or supports several small initiatives and projects.

‘Design op Maat’ (Bespoke Design) (OPAK) (2012-2015) explores the possibilities of a ‘FabLab and open design for the development of self-care and self-management tools for and together with people with type 1 diabetes. By starting from an immersion in the daily life of persons with diabetes and by focussing explicitly on opening up and sharing (the developed) designs and prototypes, new possibilities for design and aesthetics are researched.

FabLabs in the border region (Interreg IV) (2011-2015)  wanted to stimulate the collaboration between students and researches from universities and university colleges with industry and social economy in setting up and supporting different FabLabs in Flanders and The Netherlands (border region).  The creation of FabLab Genk was an important aspect of the project.

Me WordPress Theme by themehall.com