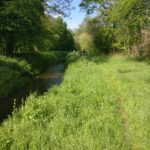 The next two years, I’ll be working on the Stiemerlab project. Stiemerlab is a citizen science project that aims to map the water quality of the Stiemerbeek (a stream in Genk, Belgium).  The water quality (pollution, algae formation) and biodiversity of the Stiemerbeek and Stiemerbeekvallei are affected by the sewerage system of the city and the increasing urban expansion. The citizen science project Stiemerlab starts from the premise that local residents and local organizations can actively contribute to charting and tackling water quality issues. The project aims to actively involve citizens, among other things by training them as citizen scientists to collect data about the water quality in the Stiemerbeek using sensors. In addition, citizens will also be able to participate in mapping the biological water quality by taking water samples at various locations in the Stiemervallei. The results obtained are then visualized in an accessible way to a wide audience in the public space and on an open online platform. The aim of this project is to gain insight into the restorative nature of the stream after overflowing from the sewers.

Stiemerlab is a collaboration between LUCA, School of Arts, VITO, Center for Environmental Science – Uhasselt, City of Genk, Flemish Environment Agency (VMM) and is financed by the Flemish government.

Me WordPress Theme by themehall.com